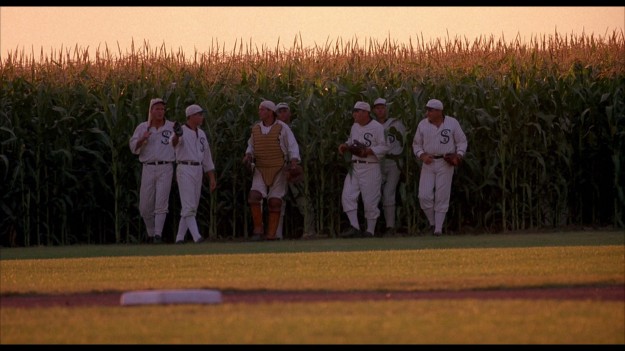 From the film “Field of Dreams”

A sermon preached at Lyonsville Congregational United Church of Christ on April 12, 2015 (Second Sunday of Easter)

Last Sunday was the glorious day of Easter. It was a beautiful day here, with worship and joyful music and an Easter Egg Hunt. We enjoyed a great feast afterwards. And then, on Easter evening was the opening day of baseball season – the Cubs played the Cardinals ar Wrigley Field. Both of our local Chicago teams — the Cubs and White Sox — were excited and hopeful for this new season. Unfortunately, neither team has gotten off to a great start. But, it’s a long season. Still more than 150 games to play. Who knows – this could be the year!

But what do baseball and the good news of Jesus have to do with each other? Why celebrate a new baseball season in church? Actually, many writers have written about the relationship of the two – such as John Buchanan, the former Senior Pastor of Fourth Presbyterian Church in Chicago, who is a big baseball fan, Maybe it is this coincidence of Easter and the start of baseball season, and the hope they offer in the face of great disappointment. Jesus was dead; but just when it seemed the story was over and all hope was lost, he was raised! And no matter how bad a season our local teams had last year, they have new teams this year with a lot of potential, and a new chance to put together a winning season. Both Christians and Chicago baseball fans are people of unreasonable hope that refuses to be dashed.

But there is more. John Bowlin, who teaches at Princeton Theological Seminary, wrote recently about baseball and theology – that baseball seemed to him to be a “gospel game.” (“Laying One Down,” from the Christian Century, April 2, 2014) And one particular play in baseball has powerful meaning to him. A batter comes up to bat. A runner is stranded in a far country – third base. That runner, and his teammates and manager want that runner to get home safely. There is one out. The batter, in obedience to the instructions of the manager, purposely lays down a bunt, knowing full well he will probably be thrown out at first base. Why would a batter do such a self-defeating thing? Because although he may be out, the runner on third can come home to score. It is called a sacrifice bunt.

This isn’t something the batter really wants to do. He would love to get a hit – maybe even a home run. It would help his statistics and maybe even his paycheck. But because the manager values that stranded runner and the run he would score if he makes it home, and because the chances of getting a hit are small, the manager flashes a sign to the batter to sacrifice himself, and the batter, because he respects and wants to please the manager, obeys. It might be said the batter lays down his bunt for another. When he is thrown out, he descends into the dark and dreary dugout.

According to John Bowlin, the sacrifice bunt is a parable of Christ’s sacrificial death for our sake. Jesus did not want to die, any more than a baseball batter wants to make an out. Instead, Jesus was obedient to the one who sent him, and shared the love that God has for us, who are stranded in sin far from home, and no way to get home without help from another. He was willing to lay down his life for his friends.

This sacrificial, self-giving love, saved not only the people on God’s team — the people of Israel, but it even attracted and created bonds of community with the Gentiles who did not even know God.

Some people object to the idea of a God who would send a beloved child into this world to die a cruel death. A manager does not always send a batter to the place in order to make an out. But sometimes, in certain situations, it is the best thing to do for the sake of others, and for the good of the entire team.

This is, of course, an analogy – a parable — and an imperfect one. A batter who lays down a sacrifice bunt does not expect to suffer terribly as a result. Crucifixion is a terrible thing to suffer. A baseball player expects to have another chance to bat in a few innings, or tomorrow, or next season. Jesus may not have known if there was any future for him beyond the cross. But the resurrection restored him to a place of honor. “God also highly exalted him and gave him the name that is above every name…” (Philippians 2:9)

Bowlin writes, “The one who lays down a bunt for another, who is thrown out and then descends to the dugout, may nevertheless be regarded with favor by the manager, who may give him a chance to swing the bat during Sunday’s game. Batter up!”