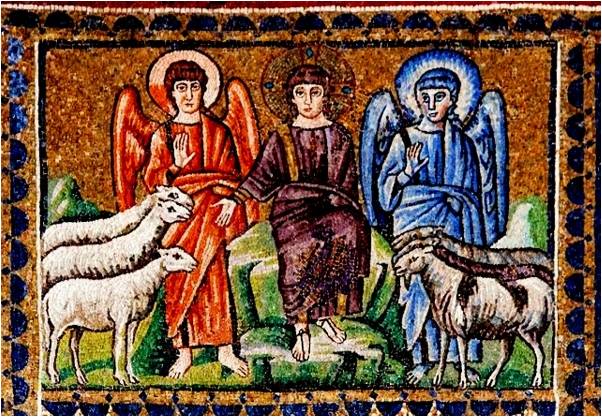 Today is the last Sunday of the church liturgical year. The Christian Church for many centuries has worked on a yearly calendar that is different from our secular calendar. The church yearly cycle begins with Advent – the season of preparation for the coming of Christ that starts four Sundays before Christmas. Next Sunday will be the First Sunday of Advent. The church calendar then proceeds through the seasons of Christmas, Epiphany, Lent, Easter, Pentecost, and finally the season known as “Ordinary Time” that lasts through summer and fall. The liturgical year ends with what was traditionally called “Christ the King Sunday” – these days we call it “Reign of Christ Sunday.” It is a day to remember the belief that Christ will rule in glory over all creation.

It also happens to come just before our American holiday of Thanksgiving – a time to give thanks for the good things we have received from God. So today is kind of a “multi-tasking” Sunday!

Christ will rule in glory. It may not look like it right now. These days much of the world is still ruled by people who wield great wealth, or power, or terror. Even here in America, where we take great pride in having a democratically elected government, and where we don’t want any person to rule over us, it is hard to ignore how often elections seem to go to the candidates with the most money. We can argue over coffee about why that seems to be the case.

But we in the church proclaim that Christ has come to establish the Realm of Heaven here on earth. It has already started – in the birth, ministry, death and resurrection of Jesus. And it WILL come to completion. Maybe sometime soon. Maybe even tomorrow! But for now, it is kind of like our own government. Just a few weeks ago we had elections in this country. Here in Illinois we elected a new governor, and some new representatives to congress, and many other leaders who will help determine policy for the next few years. But they don’t take office for several more weeks. So for now, we have what is known as a “lame duck” session, where people who will soon be leaving office are still making decisions – decisions for which they no longer must be politically accountable. New leadership has been elected, but for a time the old leaders still wield power. Lame ducks.

So it is that the Reign of Christ has begun, but it has not yet come in all its fullness. For now, the old principalities and powers still exert their influence – often for the good of a few at the expense of many.

The good news is that it won’t always be this way. The church has believed that Christ will return to rule over all nations in holiness and righteousness. It will really be a good thing – for the poor in spirit, and the meek, and those who hunger and thirst for righteousness, the merciful and pure in heart and peacemakers. But we believe it will also be a time of judgment for all people. It is a truth that in this life, our justice system is imperfect. Just this week there was news of men who had been wrongly convicted of crimes that had them on death row. Many people get away with doing terrible things – without being held accountable. But if indeed there is a God who is good and just, then a final judgment is absolutely required. Many people yearn for a time when those who cause great harm and suffering will be condemned for their deeds. But then the question is — who will be able to stand in the judgment? Some days I might stand a chance of getting sorted in with the sheep – if the Divine Judge is having a good day. But most days I probably deserve to be with the goats.

How do we get counted among the sheep, rather than the goats? Theological opinions vary. Some churches teach that the way to be “saved” — or to get into heaven — is to have a personal relationship with Jesus. Not everyone is sure what that means. Others teach that we get to be among the sheep by being a part of the “true” church. The problem is that there are hundreds – perhaps even thousands of different Christian denominations and sects and cults – each of which is sure it is the one “true” church of Jesus. Our own Protestant Christian tradition has insisted that we can never “earn” our way into heaven through any good things we do – we can only be saved by faith in God’s grace. Still others believe that God has already decided whether we are sheep or goats – we are predestined for one or the other.

Which is it? I’m sure one could find biblical passages to support any one of these possibilities. As much as Christians might believe or wish the Bible presented one, consistent truth on this matter, as far as I can tell it doesn’t. The books of the Bible were written by many different people, in many different contexts – each of which had their own understanding of God’s message. It is not consistent.

This text from Matthew suggests that what matters is how one treats “the least of these” – people who are hidden and forgotten and of little concern. Because in the same way we treat God/Christ.

This is hard. For one thing, it is hard to imagine that if this Jesus Christ — whom we believe to be God in human flesh – is present and alive in our world, he/she might be hungry, or homeless, or doing time in prison. That is not where most folks would think to look.

But it is also a hard teaching because it conflicts with our American belief that we should pull ourselves up by our own bootstraps. And it seems to ask too much of us. Sometimes I can feel generous enough to help one person, but I can’t help everyone! And what happens if those who want our help aren’t deserving of our help? What happens if someone is hungry and homeless because he is lazy, or an addict, or not very smart with money? What if that person in jail belongs there because she actually did commit a terrible crime? What if we help someone, and they show no gratitude?

That is when it is good to remember how many times we have received good things from God, and then squandered them on foolish things, or been undeserving and ungrateful ourselves.

So what is it that will get us into the Sheep Club at the last judgment? Is it right relationship, or right belief, or caring for others? Maybe it’s not either/or. Maybe it is both/and. Maybe they are all not only important, but mutually reinforcing. Having a relationship with God in Christ helps us to see the divine image in others. Knowing that we are saved by grace allows us to be graceious. Helping others may help us appreciate how blessed we are, and how little we can do alone. Sharing is our way of expressing thanks to God. And it may help us to develop relationships and community with those with whom we share – and that is where we see God’s presence.

Maybe this story suggests that the focus of our spiritual life shouldn’t be trying to figure out how to get into some other-worldly heaven or hell. It is interesting in this story that the people who get sorted into the sheep seem to be genuinely surprised. When they helped people in need they didn’t know they were helping the Divine Ruler and Righteous Judge. They didn’t do it to earn their way into heaven. They just did it because it was it was right and good. The point of a religious faith is to learn to live fully and faithfully now – and helping others do the same.

And maybe the Day of Judgment is not some far-distant time to come. It is right here and now. The author of the gospel of Matthew seemed to believe that he lived in a world where two different kingdoms were in conflict: the kingdom of wealth and power and domination in which people are to be used for the benefit of others; and the Realm of God ruled by love and mutual respect and serving one another. I think that is a helpful way to look at the world. And every moment of every day we are given the choice of which kingdom we will live in. It’s easy to fall into the patterns of the human kingdom – the goats – because so many of our relationships and institutions play by goat-rules. To live in that kingdom is “the eternal fire prepared for the devil and his angels…” It is “eternal punishment.”

But each time we gather in worship, we pray once again to live as the sheep of God’s pasture in that other realm: “Thy kingdom come, thy will be done on earth as it is in heaven.” It’s not easy to live there – it is unnatural, and countercultural. It can even be dangerous, because the rulers of the goat world consider it a threat to their power. But that Realm of God is “the kingdom prepared for you from the foundation of the world. It is “eternal life.”

So are you a sheep or a goat? Maybe the choice is ours – today and every day.