When they had brought them, they had them stand before the council. The high priest questioned them, 28saying, “We gave you strict orders not to teach in this name, yet here you have filled Jerusalem with your teaching and you are determined to bring this man’s blood on us.” 29But Peter and the apostles answered, “We must obey God rather than any human authority. – Acts 5:27-29

In May, Lyonsville Church celebrated our 170th anniversary. I have been using that occasion as an opportunity to look back at some of the important events in the history of our church, and to reflect on how God was – and is – at work among us.

In the early years of the church, some church members were abolitionists – working for an end to legalized slavery in the United States, which they believed to be immoral. Some church members were part of the system known as the Underground Railroad – a secret system to help escaped slaves find their way to freedom in Canada.

When many people – especially young folks – hear that term “underground railroad”, and learn that the church may have been part of it, they imagine some kind of secret subway system that made a stop in our church basement. But the system wasn’t actually a railroad, and it didn’t operate underground. Instead, it was a network of safe houses (like the Graue Mill in Oak Brook) where escaped slaves could stop for a short time on their journey to freedom, to get some rest, food, and assistance in getting to their next destination.

It was illegal to help escaped slaves. And so no written records were kept about Lyonsville’s participation. As a result, this church is not officially recognized as a part of the Underground Railroad. All we have is some oral history, written down long after the fact by some of the earliest members of the church.

Actually, as far as we know, the church as a whole was not involved. Until 1858, there was no church building. There was no church basement until many years after that. Escaped slaves probably never stayed in the church building. Instead, one of the founding members of the church, Rufus Brown, used his home (in what is now the Acacia development) as a place where escaped slaves could stay and hide for a while. Mr. Brown, and occasionally other church members, would then transport them, or send them on to places like Graue Mill, or Chicago, where they could board a ship or find other transportation to Canada – where slavery was outlawed.

Still, it is remarkable that folks would knowingly break the laws of the time, and risk arrest and fines or imprisonment, in order to help others – to do what they believed was right. They believed they were living out their Christian faith in this way. There are some folks who believe the church should not get involved with politics, but our ancestors in this church certainly did.

Today, I think most church members are proud of that part of our history – proud that they did what was right. But I have always been curious what folks in the church and in the wider community thought about it at the time, because it was controversial – even for many Christians. I wonder if there were some early members of this church who thought the church shouldn’t get involved in the issue. We will probably never know.

According to the Bible, slavery was an accepted part of society – both in Old Testament and New Testament times. We read a passage from Deuteronomy this morning about how the people of Israel were to treat slaves. But ancient slavery was different than what was practiced in early America. Slavery was not racial. Most slaves either sold themselves – or were sold by their family into slavery when they could not pay their debts. Others were captured in wars of conquest and forced into slavery. Some were born into slavery as the children of slave parents.

If a member of the people of Israel sold himself into slavery to another Israelite, he was supposed to be freed after six years. Non-Israelite slaves could be kept for their lifetime. There were some limitations, but clearly slavery was accepted.

In several New Testament texts, slaves were encouraged to be obedient, doing good service to their masters. One remarkable thing about the early church communities is that they often included both free persons and slaves. That was a shock to Jewish and Roman societies, because normally slaves and free would not associate with one another.

But the Bible never specifically outlaws slavery. So there were many Christians in 19th century America who believed that slavery was natural and ordained by God. We should be aware of this whenever someone appeals to the Bible to justify beliefs or laws. While some texts in the Bible seem to accept and support slavery, we must also remember that an entire book in the Bible (Exodus) tells the story of how God helped an entire group of people escape from slavery in Egypt. God created, and loves, all people, and did not intend any to be slaves to others.

We also realize that society changes, and attitudes change. Polygamy (men having more than one wife) was an accepted practice in biblical times, and was never really prohibited in the Bible, yet we have come to believe that this is not a good practice in modern times. Likewise, many people these days point to a few passages in the Bible that condemn homosexuality, not recognizing that a significant number of people may just be born that way, and that they can be loving and faithful to one another, and faithful to God as well.

My point is that in making ethical decisions based on what we believe God wants, we should not just find a few passages that support our views (because sometimes the Bible can even have contradictory opinions), but should look at the entire sweep of what God has been trying to do through human history. That is what those abolitionists and participants in the Underground Railroad did. They believed God created people to be free, not to be property.

And since they believed that slavery was immoral, they believed it was right to break the laws that supported the institution of slavery. But how did they – and how can we – as citizens of a nation of laws, justify breaking some laws?

Peter and the apostles defended their activity by saying that they had to obey God rather than any human authority.

Rev. Dr. Martin Luther King, Jr. wrestled with this question in his masterpiece of writing known as his “Letter from a Birmingham Jail.” King was in jail fifty years ago (June, 1963) because he and several others had participated in a protest against racial segregation in violation of a legal injunction the city of Birmingham had won prohibiting certain kinds of demonstrations. Dr. King had intentionally broken the law – a law he believed was unjust.

Dr. King distinguished between just and unjust laws. He articulated several different ways to distinguish the one from the other.

Dr. King argued that any law which substitutes an “I-it” relationship for an “I-Thou” relationship is unjust. The master – slave relationship was unjust because it treated a person like property, not as a person.

We live in a great nation, but even this nation, with its government “of the people, by the people, and for the people,” has sometimes enacted and enforced laws that we as Christians might consider as unjust. Slavery was one of those unjust laws, and we remember with pride and thanksgiving the faithful believers who risked the consequences of breaking some of those laws – helping escaped slaves make their way to freedom – because it was the right thing to do, not necessarily because it affected them.

What about us? Do we have the faith to confront injustice in our time? Our drug enforcement laws seem to incarcerate African-Americans and Latinos in far greater numbers than Anglos. Congress has been working on revising our national immigration policy because some believe the current laws are unjust. The Supreme Court of the United States has recently ruled that laws prohibiting same-sex couples from marrying may be unconstitutional and unjust. These laws may not directly affect us, but they can cause great hardship for our sisters and brothers.

Being a Christian means being concerned about what happens to people – our neighbors. And it means doing what is right, as best as we can determine what is right – even when it is unpopular, or risky. That is our legacy from the Underground Railroad. 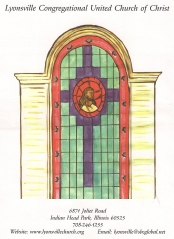